MindScape-artist Jaime Poutine is, according to her own words, "a traditionally-trained mixed-media artist based in Dallas, Texas. While having been an artist for most of her life, she has been working primarily with alcohol inks since 2016.  The various properties of alcohol (as opposed to water or oil based colors) work very well to create vibrant paintings that resemble landscapes, ethereal shapes, and visions that only the mind can understand.
In the MindScape series, Jaime has created a number of works which resemble colorful scenes and phrases that she has seen and heard during hypnagogic hallucinations, a resulting symptom of her narcolepsy.  which is a brain disorder that causes a person to be unable to suppress REM (dreaming) sleep.  These vivid dreams that can occur at the twilight stage between waking and sleeping are often very realistic and strange.  Every phrase on the pieces in this series were spoken in a voice that did not seem to be her own, but originated from somewhere else within her own mind.  Generally these voices speak kindly or violently depending on circumstances in her waking life. As you can see, the mind can be a very strange place."
http://maps.secondlife.com/secondlife/Nice%20Atoll/94/179/1003 . 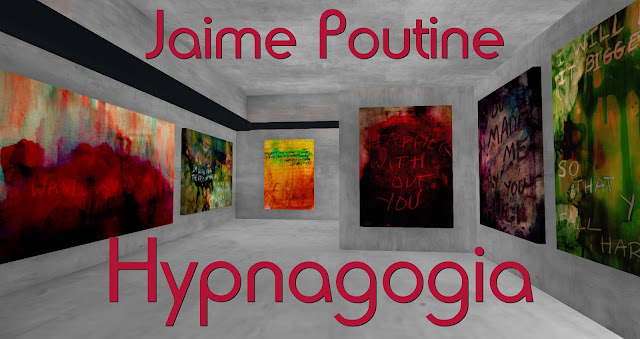